An Abstract of the Edgar Degas Biography

Renowned for illustrating ballerinas, the female silhouette and to the Parisian lifestyle, the Edgar Degas biography chronicles a perfectionist, who was often unsatisfied with his masterpieces. Esteemed among other iconic artists of the 20th Century, such as Henri Matisse, Claude Monet and Pablo Picasso, Degas’ signature epitomized vivid colors, a severe line.

What makes Edgar Degas’ biography such a legend of the Impressionist period was the artist’s ability to narrow the distinction between traditional academic art and  the 20th century’s radical movement.

Some of Degas’renderings  exude women from a cross spectrum of backgrounds milliners, prostitutes laundresses, and cabaret singers to aristocrats. 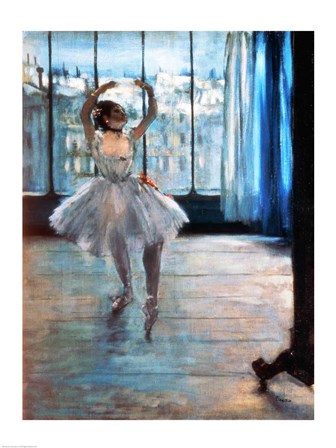 Click on the photo to review the collection of Edgar Degas Fine Art Prints.

Prior to his career blossoming, Degas had a brief stint at the prestigious school of École des Beaux-Arts, where he studied under the guidance of Louis Lamothe. Then on an impetuous whim, Degas exported his studies to Italy for three years. Residing  with a relative in Naples, the artist studied the painting of sculptures as well as the Renaissance.

Inspired by Italy’s critically acclaimed daedal inventor,  Leonard Da Vinci, Degas’ time in Italy contributes to the evolution of his work. Degas dabbled in a myriad of media, such as monotype, pastel, wax modeling, etching, oil, lithography, gouache, and photography. The Frenchman garnered a reputation for being one of the premier draftsman.

The painting, “The Steeplechase” embodies a milestone of the Edgar Degas biography, when his art took on a notable transformation in 1866.

According to Britannica Encyclopedia, the Edgar Degas biography reports few details pertaining to the artist’s family life. Degas reenacted one of his childhood memories, in the 1872 painting titled, “Lorenzo Pagans and Auguste De Gas”. The canvas reflects, a recital, orchestrated by his father, in which his mother sang opera arias. There is speculation that Degas had aristocratic ties with relatives residing in Italy and New Orleans, Louisiana.

Edgar Degas Biography: Born with the sir name Hilaire-Germain-Edgar De Gas, on July 19, 1834 –  in a town due south of Montmarte, France and purportedly passed away in Paris on September 27, 1917.